Tuesday, December 31, 2019 in Bloomington, IN at IU Memorial Stadium 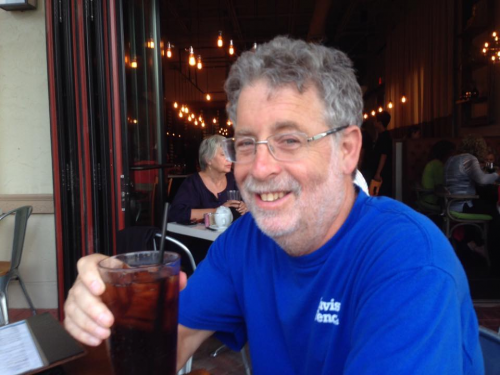 In memory of Jerry Levy

When my dad was setting up his email address, circa 1997, he couldn't think of a screen name, so my brother said something to the effect of, "You should pick furball -- like your hair." That name was taken, so my dad chose "furfurball" instead.

If you're reading this, then here are a few things you need to know about my dad: he valued honesty and loyalty above all things. He loved to play tennis, shoot craps, and drink a vodka on the rocks with a slice of orange when out with friends. He was super personable and outgoing -- he'd talk to a wall if it would talk back -- and he'd watch the same movie every night for months on end -- Independence Day or Armageddon or a select few "chick-flicks" -- to help him fall asleep. He liked a lot of ice in his iced tea and he spit when he yelled and he never let me win a board or card game, ever. That way, he said, when I did win, I would know that I had really, truly won. And my dad -- who passed his competitive nature down to me -- usually won.

Until he didn't. Until he was diagnosed with pancreatic cancer in February of 2014. Until he was told he may be eligible for the Whipple surgery only to learn that the tumor was on an artery. Until he did months and months of chemo to shrink that tumor off the artery. Until they told him that it did shrink -- but didn't budge. Until he kept fighting for as long as he could stand it. Until he lost the war: September 11, 2015.

Instead of wallowing in sadness and grief, though, we will fight alongside the other participants to raise money, raise awareness, and raise hope. No one should have to suffer like my dad suffered, and no one should have to watch a loved one go through that.

So thank you -- truly, thank you -- for your donations and/or participation in this year's Hoosiers Outrun Cancer.

If you are the owner of this homepage, please login to make changes. Use the username and password you created or used when you registered for the event associated with this homepage.